The first edition of the Barkley Fall Classic took place on September 20, 2014. The race opened with 300 slots and filled in less than two week. Quickly the wait listers were pulled in with over 60+ runners dropping out before packet pick up and another 40+ runners deciding to DNS according to Race Director, Steve Durbin.

The Fall Classic was a chance for the masses to get a taste of the Barkley Marathons which takes place in the Spring each year at Frozen Head with a limited field of 40 participants and overlaps some of the trails that we would run through the park during the Classic including one off trail section know as "Rat Jaw" which gave the Classic runners a hands on feel of the real thing. 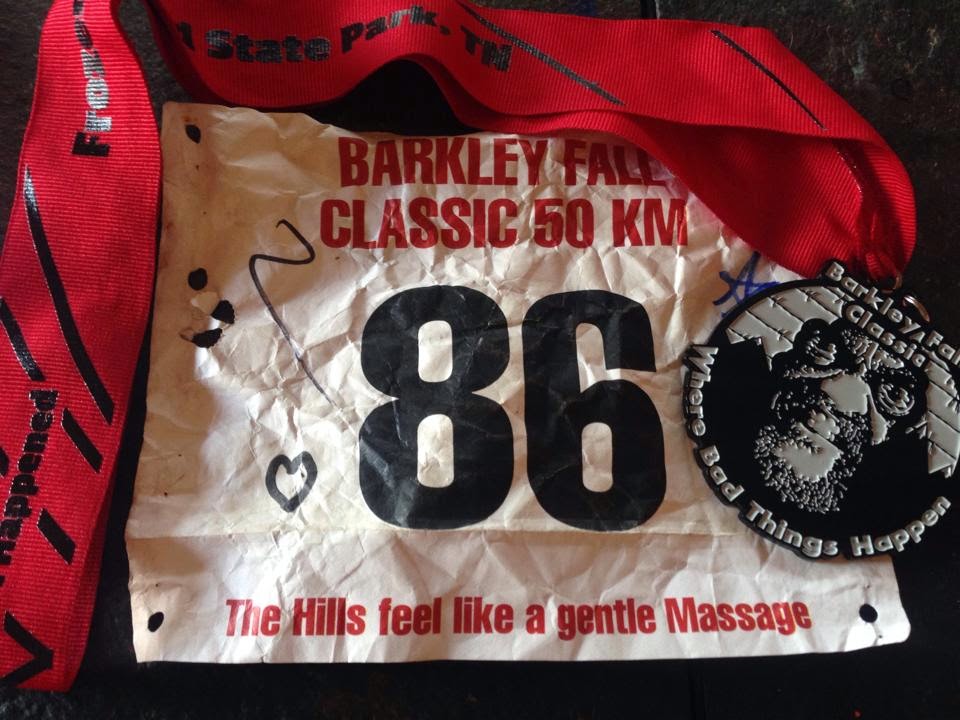 My last experience "racing" at Frozen Head the weather was less than perfect. Mid 30s, rain, sleet, snow, rain, wind and a little more rain. The Classic gave us near perfect running conditions with a clear morning in the mid 60's and a high of 80. The Classic also featured 5 aid stations most of which were manned by local Wartburg Basketball and Football player along with several Barkley legends. Everyone was amazing out there but Carl Laniak was my saving grace.


The race started promptly at 7:00am with Gary Cantrell lighting a cigarette sending the masses down the first 1.5 miles on the asphalt before reaching the famed Yellow Gate sending us up Bird Mountain. By the 6th switch back both heels began to burn. My last 1000 miles of racing and training have been in my Luna sandals and switching back was a horrible mistake. I ran in my Inov-8 Roclite 295 (same shoe I ran with in March) but my feet had changed. I pulled off the trail at the top of the first climb to see if there was something in my sock that was causing my feet to burn so much in the first 3 miles. I was shocked to see that a 3 inch blister had already formed on each heel.

The Black Dog in this race was the memory of quitting last March and there was no way that I was walking down the mountain again to give Laz and Steve the satisfaction of hearing... "I quit". I hooked up with a awesome crew from Birmingham (BUTS) as we ran across the North Boundary Trail towards the first aid station at mile 7.6 on top of Bald Knob. Chatting kept my mind off the burning discomfort as we went down the back side of Bald Knob towards The Garden Spot where running legends Mike Dobies and Joe Fejes were standing on the side of a mountain looking to punch your bib before you began working down towards Coffin Springs. I had a quick conversation with Joe about his upcoming race schedule and then headed off again.

2014 Barkley Alum, Bill Lovett and I continued to leap frog each other through out the course and he took off blazing down the trail with a small group. When I got to the top of Little Fork Mountain you could finally see what a gorgeous day it was turning out to be. I actually said out loud, "I love this place" and started back down the trail. Before I got to Panthers Gap, I felt the skin on my left heel rip and I knew that I'd be rolling into the second aid station at Tub Springs very soon. When I did, the first thing I ask was if anyone had any tape: medical, duct, masking, scotch... I didn't care. Mr. Vol State Carl Laniak came to the rescue and even made some make shift "bandaid" pads out of a paper towel. I cleaned off both feet as much as possible and then wrapped them with tape and then headed out.

The next section of trail was an out and back "6 miles total" with Rat Jaw just prior to the third aid station (the same one that I was currently at). This section sucked. My feet were trying to get use to the tape and I could still feel the skin tear as I went up. "This isn't how I wanted to meet you!!!" was how I finally met Stephanie Miller who was flying back down Fodderstack and I hobbled up. When I made the top I snagged 4 jelly beans from some awesome dude and then started back down. Down felt great, but my feet were getting wet. I pulled over on the trail and pulled my sock back... BLOOD. Four more miles till I would see Carl again and his magic roll of tape.

Bill and I caught back up with each again and then we ran into Bo, Karen and Brian coming off the Fodderstack Trail. We all hugged and went off in opposite directions. A few strides later, I came across Verity who was all smiles and seemed like she was having a blast out there. Working my way back up the OPM Trail, I saw a flustered Jason who took a wrong turn leaving the last aid station and headed toward Rat Jaw early. We chatted briefly and  took off, as I said good bye I took a sip from my hydration pack and it was dry. I never filled it at the second aid station and I was about to go up Rat Jaw. Like a homeless man I was begging for water, everyone was low. 1000 feet in 0.8 miles with briars neck high. Half way up... I found a 16oz bottle of liquid gold laying in the middle of the briars! I was saved AGAIN!


Coming in to Carl's Aid station again my feet felt as bad as they could possibly get so I figured why bother taping them again. I filled my 70oz bladder to the very tippy-top and my newly acquired 16oz back up bottle and headed off for 4 miles of downhill trail to come off Old Mac Mountain. I spent a lot of time walking over this stretch and tried to figure out what Katy Perry said, "it tasted like" when she kissed a girl. Come to find out later, it was "cherry chapstick".

I loved my stick pictured above but my poles with their padded-formed hand grips and wrist straps felt amazing. Before heading out on the final loop, I met up with Tim (Salt Shack). Salt asked me about the next section and took off, my legs were getting heavy and my feet were still screaming.  My trekking poles made the next climb almost enjoyable. I could smell Fall in the air and a weird fog drifted down the mountain. Coming across Low Gap, I found Tim again and we hiked together for several more miles. He's an awesome guy and gave me my favorite quote of the day: "...and in 10 steps... I.will.puke" I think he made it 6 steps. We chilled out for a few minutes and then Jason "Yeti" Green came up the trail smiling and we cruised into the finish together. It was great to close out the day with him.

Overall the race was everything that I hoped it would be. The additional struggle from my feet could have been left out of the equation but like they say... "Bad decisions make for better stories". This race was planned as my Fall training kick off and I got out of it everything I wanted and then some. It was a great weekend with great friends and can't wait to go back and be out there again!!!

Where am I staying: Frozen head State Park Camping site #7 - stop by and say hello!

I don't anticipate there being much coverage through out the park, but I'll have my tracker on during the race. Click the logo below: 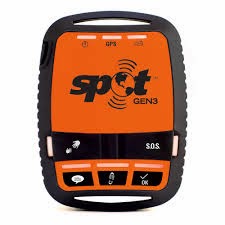 Track my progress while "out there": http://tinyurl.com/WazBarkleyFC