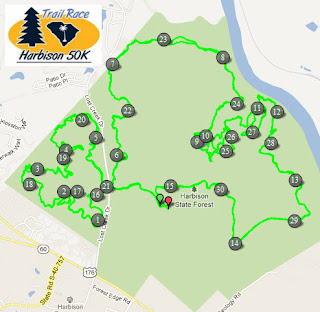 This past weekend I ran my first Ultra of the year in Harbison State Forest just outside of Columbia, SC. The race was the second annual Harbison 50k put on by Dan Hartley. The race was top notch. Very organized, the course was well marked, the volunteers were great and the swag was pretty awesome!
Going into this race I planned to take it easy and just get the miles in as I ramp up for my Delirium Ultra 24 Hour Endurance Race on Feb 11, 2012. In the back of my mind I knew that I would end up pushing it a little harder than I should have and would end up racing the entire course. But I was going to try my hardest not too!!!
We ended up turning the race into a mini road trip with Paul "the hammer" and Gary "DJ Ice" and were spoiled by a huge three room suite at the downtown Hilton, thanks to my long time friend, Tony Tam. The trip up was uneventful and after a quick tour of the course and lunch at Mellow Mushroom we headed back to the room to watch "Unbreakable" and "Pre". Nothing like a few good Running flicks to set the mood for the upcoming race. We had a short pre-race meeting downtown at the Half-moon Outfitters, getting last minute race instructions and our race packets including our awesome shirts and Harbison 50K Pint Glasses.
I was the first to bed when we returned to the room and the last one up in the morning (but I needed the extra rest after moving all week). We headed out to the course at 6:00am and woke up to a nice 48 degree weather. Shorts and a tank would be my clothing choice for the day! No layering needed.
Another quick race recap by Dan at 7:20am around the camp fire sent us down to the starting line for an on-time race start (which is always a big deal for me!) The course would be two 15.5 mile loops with the first 9 being made up of single track rolling hills and the next 6 miles (including the nasty Spider Woman Trail) being much more technical and a lot more elevation.
The Aid Stations were stocked with everything you could want/ need during an Ultra. I ran with my iFitness belt with two 8oz bottles on the back of my waist and an extra 12oz Amphipod bottle
on the front. I started off with 28oz of Coconut Water (pineapple flavored) and drank that plus another 8oz of water during the first loop. (This is important later)
I started my second lap after 2:25.00 by topping off my water bottles with more Coconut Water, grabbed a few Strawberry Fig Newtons, two rice cakes and a banana. By the time I reached the woods again around mile 16 my bladder was full and needed to pull off the trail. No luck. I quickly began to run again before the urge struck me again. This time I was going to go as I did not want to have to stop again with only 16 mile under my belt. The sight made me weak. What should have been a "light yellow" was more "sweet tea-ish" and I felt a pain in my bladder like never before. This really scared me and I quickly went into a systems check mode. How much had I drank - more than enough - are you sure - yeah - two bottles, plus one with one refill plus everything I had the night before - I should be fine- then why does it hurt - are my kidneys shutting down - okay...just walk. Just drink.
I walked to the next Aid Station and sat down on the ground and began to drink. I was really scared, but I was on the start of a loop and would need to walk out anyway. After two full bottles (32oz) of water I left the aid station and tried to run by my bladder still hurt with every stride. My game plan at this time was to pull out of the race when either Paul or Gary came up on me, surely they would say that it was the right thing to do. I'm glad that I never saw them.
The next five miles were the longest of any race. It felt like I was going backwards the whole time. Every chance I got I would try to jog a little, just to get to the 20 mile mark. Finally I made it back around the loop and no longer felt the pain in my bladder. I was able to start running and I was still able to drink nonstop thanks to the Aid Stations that were popping up every four miles or so. The next 11 miles were not the greatest but I was going faster than my goal pace for Delirium and I was getting in some good hills too.
I crossed the finish line in 5:28:16 according to my watch and quickly grabbed my highly deserved and desired Hamburger and downed some Sprite-like drink from Kroger for the added sugar and fluids. This was 1:00pm, it 10:00am the last time I went to bathroom and wasn't until 7:00pm that I would go again. Needless to say my body was overly dehydrated.

By the time I got back to the car, checked my phone, Paul "the Hammer" was coming in to finish his first Ultra Marathon! You could just tell by Paul's face that he was thrilled to finally have the full distance under his belt. Smiles from ear to ear! (or beard to beard). He crushed it in 5:38.00
I had a text message from Gary saying that he was at mile 24 and that he was done. I knew that he would beat himself up (more than I would) if he were to pull out now, but at the same time he had to walk in to make it back to the finish. I sent him a quick text back telling him just to take it step by step and we'd be waiting. Gary then ran the next 7 miles in and finished the race looking great and proudly got his finishers medal and our second Pint Glass - the "Bison" Mug (a misprinted first run of glasses that should have said "Harbison" - all runners that finished the race got the second "collectors" mug!

After a quick shower back at the Hotel, we packed up our gear and headed home. Paul and I sacked out before we were even on the interstate, I think Gary stayed awake the whole time, but I guess we'll never know!
I finally got my "color" back under control by the following morning and didn't have much discomfort other than a sore tail bone (not really sure where that came from) 48 hours after the race was over and I feel fresh and the legs feel great.
I have a very short 32 days left till my next race, which is my own creation, the 2012 Delirium Ultra 24 Hour Endurance Race on Feb 11, 2012. My goal to run 100 miles in the 24 hours and I think the training that I have been able to get in over the last few months along with my racing I am right where I need to be. Now if I can just stick to the plan again and keep my fluids under control I may be alright!
Thanks to Paul and Gary for putting in countless mile in the dark and to Holly, my wife, for staying home with my two beautiful children while I run countless miles with Paul and Gary! I couldn't have gotten here with out you guys!
Posted by Tim Waz at 8:15 PM