It’s always good to end things on a high note! My 2013 Racing season can easily be summed with three little letters: DNF

Going into this year I never started a race that I didn’t finish. This year I logged three: Chattanooga Stage Race, Viaduct 150 and Pinhoti 100.

This meant that I didn’t finish the same number or races that I did finish for the entire year. Luckily, for 2013 I’m able to go out on a high note!

My last race of the 2013 race calendar was scheduled for the weekend of December 7th in Spartanburg, SC and held inside the Camp Croft State park. The 24-hour course was made up of a 3.1 mile loop course and going into the race I had a goal of 86 miles, which was pretty aggressive based on previous performance over the last two years.

I drove up to Camp Croft on Friday and set up our Crew tent on Site #8 to get a spot close to the trailhead and the single aid station. We had a full line-up planning on setting up shop with us: Sara Maltby, Lara Zoeller, Tiana Cain, Dawn Brown, Bo Millwood and Andy Bruner. The weather on Friday was near-race-perfect! Blue skies, upper 60’s with a slight breeze. But the forecast for the rest of the weekend would be anything less than desirable.

I got to meet up with my brother Eric on Friday after and talk about the kids, sports and of course running. Lots and lots of running! Eric just came off coaching a SC State win where his girls beat second place by 127 points. He’s best statement all night. We’re going to be even stronger next year! That’s awesome… and motivating! We snuck out for a quick dinner at Wings, had a beer or two and was still able to get to bed early.

Laying down to head off to sleep, the skies opened up and dumped some serious rain down onto the trail!

I woke up the next morning at 5:00am, I always like to get an early start before a race! I had my two cups of coffee, Oatmeal and Banana – my pre-race routine, and then head to the start. The morning was cool, in the upper 50’s but there was no wind and rain had long since stopped falling. The race didn’t kick off until 9:00am so there was plenty of time to dig through my chest of race gear and try to organize everything for easy access later. As much as I bring to a race… I very rarely touch, eat, drink or wear more than 5% of everything I bring. I’m a race horder.

I checked, double-checked and then triple-checked my headlamp (the root cause of my last DNF at Pinhoti) and then hung it up in the tent in plain sight.

30 Minutes before the start of the race, the skies turned blue and I thought, maybe, just maybe we’d luck out. But by the time Race Director, Angela Merrill sent us on our way, we were back under gray and dreary skies.

The start of the race sent us on a small loop around the campground before heading out on a single track trail. This gave the runners time to spread out before bottle necking onto the trail. There was a nice downhill as the trailhead began, which meant each lap would end will a long up-hill climb (that got longer and longer as the night wore on!) Then you ran over a beautiful river and began climbing again. The trail was wet, but still in great shape. There were a few sloppy spots early on in the race but the quickly dried up with the 170+ runners forming new lines around the deep spots. 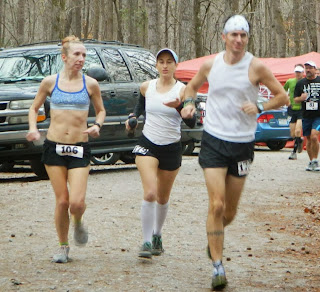 The race staff took great means to mark the course and even added a metal bridge across one creek crossing, which I dubbed: The bouncy bridge, for course location purposes. It was perfect and kept our feet out of the creek.

The first 5 (15.5 mile) laps I ran with Sara and Lara as we all had the same goal of 86 miles and it’s a lot easier to work together especially as the night wore on. Then my body began to tighten. I dropped back trying to relax my back, stretch out my legs and just get my body under control. At that point in the race I caught up with Dawn, Tiana and Bo. A couple of good laughs and “are you ok” – I mentally agreed to help Dawn get to her 100K goal if my body wasn’t going to play “nice”.

Starting my 7th lap, Tim Worden (One of the race Directors for Leatherwood and Annihilator) was about to take a break. I pulled him out on the course to walk a lap with me. Mentally, I was ready to pack it in. What’s another DNF in my long list of shitty races this year?!?! Tim and I had a great conversation over the next 3.1 miles and met up with Richard Abernathy toward the end of the loop and the merry-three of us meandered closed out what would be my slowest lap of the day at 1:37:16 (yes, it was still only a three mile loop) High-fives and fist bumps later, we parted ways and I hobbled back to our tent to decide where do I go from here.

I pulled out my Doterra DeepBlue Rub and rubbed it into my calves, quads and lower back. At this point I was mentally and physically…done. Andy pulled into the tent with Dawn and they were both laughing and “still having fun”, then Sara and Lara came in for a quick grab and go and took me back out with them. I never got the chance to tell them that I was done.

Half way through my 8th lap, now back running with Sara and Lara, my body finally began to relax. My legs felt loose again and most importantly… I was running. The conversation between the three of us kept us moving at a very good pace. We all right “there” together. If someone needed an extra minute in the aid station we waited, if someone was cold we waited to put on more clothes, if someone had to pee we stopped. We were working well together, clipping away the miles and we were still on track to meet our goal… 86 miles.

The only thing that kept going through my head was… We are all running together, but I’m still a full lap down.

Finishing lap 16, I mentally decided that I was going to try and make up the lap I was down on Sara and Lara. Coming into the Aid Station Lara said she needed to run to the bathroom and that Sara was going to grab a jacket. I didn’t say anything and immediately turned around after getting my lap counted and headed back out onto the trail to start lap 17. My body felt great and I was making up a good amount of distance… or at least I thought I was as I continued to ask the lap counters to let me know how far back (or at this point still ahead Sara and Lara were) as I ended each loop. I wasn’t very smart as I was only focused on making up that lap. I wasn’t eating or drinking right. Then I started having my “bladder issue”. I couldn’t give up at this point and pushed out for one more, hard loop. 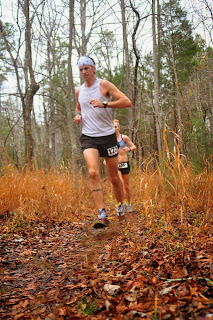 Coming into the Aid Station after getting my 21st lap counted, I saw the greatest thing ever! Lara was standing under the tent, which meant I was back on the same lap as them. I felt like a douche, but more importantly I was glad that I was back with my friends as the coldest and wettest part of the night was about to begin. We all decided to walk/ run the next loop and that sounded perfect to me! It was more of a run… but the walk breaks were welcomed!!!

Over the course of the next few loops, I continued to deal with what I call my “bladder issue” where I feel like I have to go, but I can’t. So I focused on drinking as much as I could to see if I could help get things flowing again. It was lap 25 that we all celebrated with a full flow! I know, I know… I need to get that checked out.

Sure enough the rains came it, and at one point snow began to fall. It was cold, dark, wet and the trail was getting worse as the night went on. We were still focused on meeting our goal. The ladies were now well in first place and I was sitting in second with Deano fast approaching after a nap break. We kept each other moving and it was beginning to get hard now. We were all tired and very cold. But we kept going.

On lap 25 I hit rock bottom. I felt nauseated as the lap began, and couldn’t tell if it was from being tired or if my stomach was turning sour. Whatever it was, it got worse as the lap continued. I began getting dizzy, and wandered off the trail 2 or 3 times before I just sat down… twice. I tried to each a Snickers bar I had in my jacket pocket, but it was frozen and very hard to crew. We finished that lap in just over 1:10:00 and I was finally feeling better and hopefully the sun would be coming up on this next loop.

As we closed out loop 27 Sara and Lara agreed that they were done. I still had time left and was in a very close second place. I had to go back out for at least one more to meet my 86 mile goal and to try to holding off getting passed. That last lap was very cleansing. The air was cold and crisp the water was rushing in the river. I could see my breath, thick and white every time I exhaled. But most importantly, I was running. I felt smooth and relaxed as I sloshed through the mud. The trial was very quiet that last loop as I didn’t see another soul the entire time. 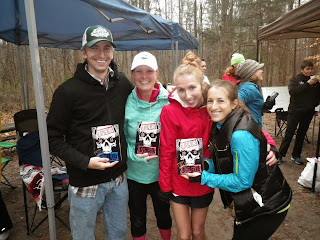 I was happy that I didn’t quit back at lap 8. I was thankful that I had two great friends to burn away the miles all night long. I was excited that the race was almost over and that I’d be heading home to the family and that I’d be sleeping in my own bed that night. I was impressed with how well the volunteers took care of us and that Angela was still standing after taking care of all the runners and two sick kids in the camper. I was thrilled that I met my goal of 86.8 miles and I was shocked that I ran away with a second place finish.

Great job to everyone that ran, thank you for all the cheers and support! My 2013 Racing season ended on a high-note which has me motivated for my next race: The Pistol 100 on Jan 4, 2014 in Maryville, TN. See you on the trial!