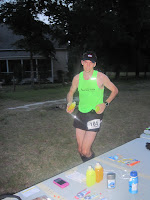 Lessons learned: Make sure there is fuel in the tank before heading out on a long trip. Last minute race decisions based on how you feel at the time can be implemented but at a cost. Running with friends is much more enjoyable than chasing shadows in the middle of the night. I'm in better shape than I thought.