I was lucky enough to get sponsored for this race, considering I am only sitting with one other race under my belt for the year. So I will not look a gift horse in the mouth, rather I will step up to the plate... get my distance in and have a great performance! (hopefully)

In my last video blog I stated that I recieved a comment from Dr. Diana stating that her 13 year daughter just signed up for her first Triathlon! HOW AWESOME IS THAT?!?!?! Even more awesome was the fact that she signed up "mainly because of my inspiration"!!! Now that kicks some serious Arse!!! (gotta tone it down, I might have kids reading this :-) ) SO I posted the question, "What motivates you?"...

For me it's personal improvement, plain and simple. I have always been that guy that has to work just a little bit harder, show up a little bit earlier or stay just a little bit later to make things workout. With Racing... it's the same... and has always been. I am the younger of two brother and my older brother always had it easy... or at least did a great job of making it look easy... i.e. State champ in the mile and 2-mile (Florida 1992) Second place state cross country (Florida 1992) Top ten finish at Kinney National (Now, Foot Locker Classic)... etc etc... I on the other hand, grew an extra 6 inches over any other male in my family in High School and forgot how to run after my freshman year... fast forward through a 6th place finish at state (Track - 2 mile) and a 24th place finish at state (cross country) two years of running at the University of South Carolina Upstate... I finally beat my brother... Granted he fell down during the race but I helped him up and then proceeded to beat him... HEY?!?! it's a win! 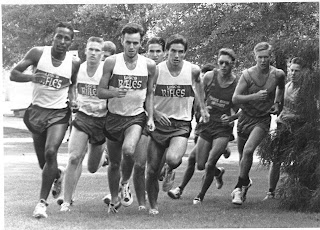 But I realized that day that if you keep trying hard and long enough things end up working out in your favor every once in a while. I actually turned into a different runner that day... I really started to enjoy it. Shortly there after I left SC and moved to TN. I started running on my own, well with the awesome help and support from my number one fan... my mom! She would go to every road race with me (as she never missed a Track meet or Cross country race in either my brother or I's running career!) every weekend, usually driving so I could get an extra hour of sleep in before race time. and after the second week I noticed something... every week I was getting faster and fast. It had taken 8 years but I finally grew into my body as a runner. I got involved with the Knoxville Track club and enjoyed 2 years of running and racing with them! But at the end of the day, that personal improvement is what keeps me on the road!

I have hopes and dreams of being able to compete in another Iron Man (hopefully next year) but my reasons are completely different. I want my kids to see me finish as they are old enough now to carry that with them the rest of their lives. Both of my kids are extremely talented athletes already at (almost) 4 and 2. Even if they did not get involved with running or Triathlons, I want to expose them to racing and all the great things that come with it! So if I can suffer, and get them hooked for life, my personal improvement is their improvement!